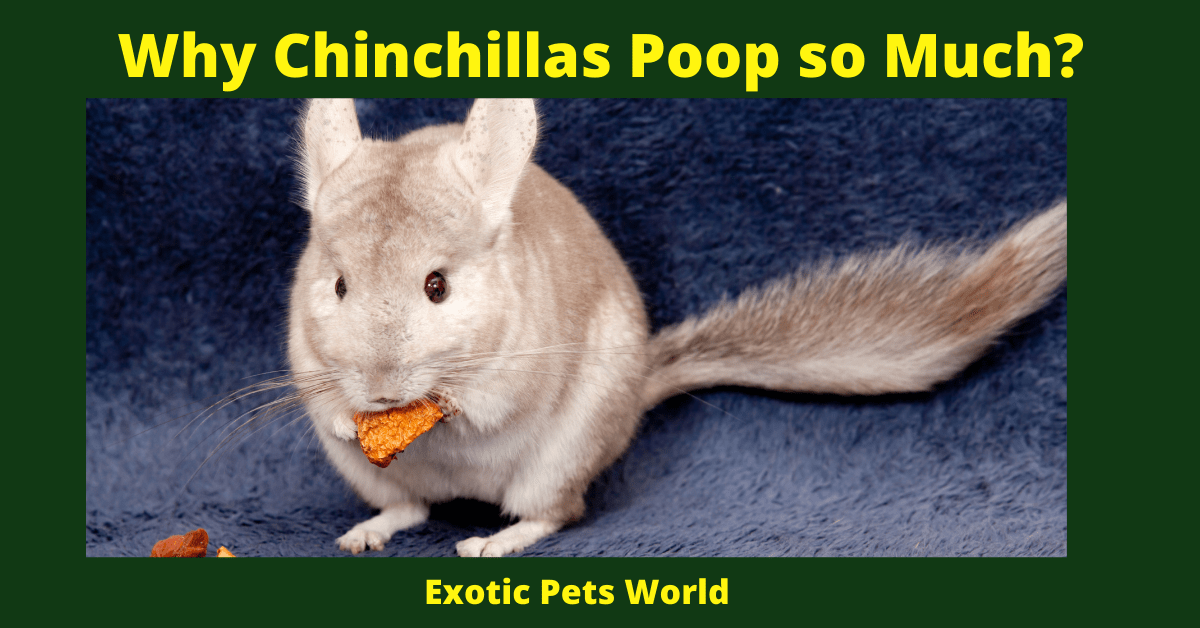 Why Chinchillas Poop so Much?

Chinchillas are unable to control their bowels, pooping on an average of 250 times per day!

This blog will educate you about so many questions that come to your mind regarding chinchillas pooping habits. Some of the frequently asked questions are How much chinchillas poop? Why is the pooping frequency of chinchillas so high? And a lot more. So sit back and scroll below to find your answers!

Certain reasons can cause your chinchilla to get diarrhea. Some of them, I am enlisting below:

You can easily identify if your chinchilla is having a digestive disturbance like diarrhea, as the changes become obvious in the poop. In case of diarrhea, the poop looks sticky, softer, and even have a mucous layer on top of it.

Besides that, it will be the only time you can feel a bad smell in your chinchilla’s feces. If you observe these changes in the poop, you must immediately consult a vet to have your chinchilla checked. Your vet will help you identify if your chinchilla needs to get rehydration therapy.

If diarrhea persists longer, consider having a check back on your chinchilla’s food. Maybe it lacks a high fiber diet. Try feeding your chinchilla solely on hay pellets based diet. Until the poop retains its consistency and normal texture back, stop feeding any other food type except hay.

Why You Shouldn’t Get a Chinchilla?

There are reasons for which I can suggest NOT to get a chinchilla as a pet. The major reason behind this is that they are crepuscular. By crepuscular, it means that Chinchillas may sleep during those hours when you are awake, and they become awake when you are sleeping. During the night time, they will make noises and won’t let you sleep.

If you have a tight schedule and still need a pet, Chinchillas are not the right choice as they need much attention. Even though they want to have your attention, still the Chinchillas don’t like it if you pick them up. Besides, Chinchillas can live a longer life, almost 20 years, a long-term commitment as a pet owner.

How Often Should Chinchillas be Let Out?

People are generally aware of the fact that their pet chinchillas need some time out of their cage each day to be in good health status. But you may be confused; how often you should take your Chinchillas out of their cage? Most veterinarians and pet owners believe that your chinchilla should be brought out of the cage daily for at least one-hour duration.

One hour is the least you can offer him out, but you can give more time to your chinchilla to play around the house. They have bursts of energy, making it imperative for a chinchilla to have plenty of time out of the cage, allowing them to climb and do exercise. This means you should provide your chin at least one session a day for enrichment, play, or exercise.

Chinchillas are fluffy and look like cuddly pets, but actually if you interact with an experienced pet owner and talk about a chinchilla, he must tell that this is not the case. In reality, chinchillas don’t like to be handled, but it can still vary from one chinchilla to another as some are more trusting.

Besides that, chinchillas have a very fragile rib cage; that is why you need to be careful enough while holding them in your hands. This fragility makes chinchillas skittish when held closer.

Is it Normal for Chins to Poop a lot

The first thing you would notice when having chins is the abundant amount of poop they produce! Letting a chin out of the cage for just two minutes, and you will see small beans like poop everywhere on the way. You might think if it is normal for your chin to poop a lot? Well, definitely yes! Plentiful droppings show that their digestive system is working the right way. You need not worry about the frequency but only have to observe if the poops are normal in their color and consistency.

Is Chinchilla Poo Bad for You?

Definitely yes! Even if your chinchilla seems healthy, still their poop may have Giardia that can make you sick. It is unnecessary that you might get infected from the poop harboring infection, but there is still a risk. Giardia gets access to your body when you don’t practice handwashing after having fun with your chinchillas. Adopting good hygienic practices can help greatly reduce the risk of infection. Make sure you are washing your hands every time you interact with your chinchilla. Moreover, other infection types that these furry animals transfer to humans include

Why Do They Throw Their Poop out of Their Cages? Stress

It has recently been seen that Chinchillas often throw their poop out of their cages, and the chins litter the surrounding area of their cage. Chins continuously eliminate while moving around, and when it comes to training them for using the litter box, it is a difficult task.

As far as a chinchilla throwing its poop out of the cage is concerned, it usually does so when stressed out and frustrated. For instance;

If your chinchilla is stressed out due to a lack of attention and care, he may throw on you to seek your attention. Similarly, a similar reason can make your pet chinchilla throw food, feces, and litter on the floor. You may need to have a closer examination of the root cause for this behavior of your pet Chinchilla.

Chinchilla’s healthy normal poop looks dry, brown, and solid, small in size, and resembles mouse droppings. Regular Chinchilla’s poop is tiny, hard brown rice grain like the undigested part of its meal. Most of the pets have bad smelling poops; unlike that, chinchillas poop is odorless. It doesn’t have an odor because it is mostly dry.

If you are having a pet Chinchilla, you must be familiar with its bathroom habits and be aware of changes in your chinchilla’s poop frequency and nature. If you see a drop in its pooping frequency, your Chinchilla might have blockage of intestines; and it may need an urgent visit to a vet.

3 Types of Problems with Chinchilla Poop

Constipation is one of the most common issues chinchillas face relative to their digestive system. Many factors can cause constipation like stress, a low-fiber diet, lack of fresh, clean water, and change in food. Changes observed in poop of a constipated chinchilla include thinner, smaller, and dry feces. If you suspect a constipation issue in your chinchilla, make sure to provide cubes or pellets of hay in its cage. You can also offer raisins and let them out of their cage if they have been in the cage for so many days.

If the course of diarrhea has been so long, it could lead to inflammation of the intestines. The other possible reason can be the prolonged use of antibiotics or infection. With prolonged diarrhea and enteritis, your chinchilla may become uninterested in treats and food. In such cases, make sure to visit a vet and get proper treatment

Diarrhea is another common digestive health problem your chinchilla can undergo. It is easily identifiable as the poop becomes sticky, soft, and easily becomes flat when you step onto it. Excessive treats and diet changes are possible causes of diarrhea in your chinchilla.

The first step you should take is to withdraw treats and ensure you provide clean and easy to digest pellets of hay. If there is no problem with hay’s cleanliness, you need to rush to the veterinarian for a proper check-up and treatment.

Chinchilla’s poop frequency is naturally high, up to 250 times a day. If you find it difficult to clean chinchilla poop, stop worrying, train them to use a litter box, but it needs time and patience to train them using it while sometimes they only use it for peeing, not pooping. All you need to focus on is to keep the chinchilla happy and healthy and observe any changes in the pooping habits to ensure timely treatments when needed.