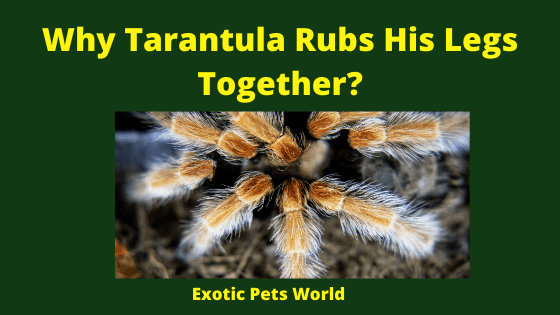 When Tarantula rubs his Legs together he is giving a warning signal or trying to groom itself. Some tarantulas mostly use their velcro-like hair to warn off predators while rubbing their legs or producing hissing noise. But if you see your tarantula hissing or rubbing its legs and other parts of the body, there is usually a chance that they can be grooming themselves.

Potential Reasons: Why Tarantula Rub Their Legs Together

It depends on many reasons concerning the age, sex, molting condition, environment, or fear of predation. These are discussed below:

Maybe They are Grooming:

When your Tarantula feels all okay and having a typical day, you might see them grooming themselves. They especially groom themselves after an excellent meal to clean off any debris/trash on their hair.

For grooming, they usually use their legs and sometimes use other parts of the grooming body. Rubbing their legs is a part of cleaning their entire body.

They Rub their Legs to Warn Off Predators:

It is not usually a typical tarantula posture to signal aggression or do a warning. Mostly Tarantula will rub its legs to produce a hissing sound. This is known as a warning sign for predators to back off instantly.

They have hooks and loops in their tiny hair, which acts like a Velcro, producing that hissing sound when rubbed together. This behavior is only seen in Tarantula species.

Will Tarantula Rub his Legs in the Pre-Molt Process?

No. A tarantula in pre-molt condition will stop eating and will remain low profile. You may rarely see them grooming.

They will be losing hair from the dorsal region mostly, from their abdomen. Their dorsal area looks more dark and shiny as they enter deep into their molting stage.

Rubbing their legs is not an indication of a pre-molting tarantula.

Different Stances Of Tarantula: How to Understand it

When Tarantula is in a Stress-Free State:

When your Tarantula is in a peaceful state, you will observe it standing with his legs happily bent. The legs will not be rushed in its abdomen, but instead, they spread out and a little bent to make a contented grip and composure on any land.

When Tarantula is Giving a Warning:

Let’s take a look at how you got your Tarantula outraged. There must be something in the way you move that shocked them. But they are trying to keep their composure and are telling you to step back.

They will lift one or two legs while the rest of the body will rest. It’s as if they’re raising their hands to come on stage and misrepresent you what you’ve done wrong. But unfortunately, they don’t speak – at least in our language

When Tarantula is Trying to Threaten You:

Tarantula knows you can control them. He is smaller than you, and if you drop them from 3 feet, they will die.

Therefore, they know that they will stand on their first two legs, their pedipalps fully raised in the air, and extended while their thorax is lifted. They do all these hard gymnastics to show that they are angry and cut your throat with their annoying fur.

When Tarantula is Pushing Hair:

Tarantulas are not precisely like throwing knives at your opponent. When you read that they ‘throw hair in your direction,’ you can imagine that they are on target.

Although it is deadly to small prey, urticating hair is extremely harmful to humans, especially when it enters any mucous membrane such as eyes, nose, etc. While their hair is harmless and substantial, but the experience can be harsh and annoying.

If you are allergic to its hair, this can be a dangerous situation.

When Tarantula Tightens its Limbs:

So far, we have discussed how tarantula attacks. But when they try to hide, they will tighten their limbs and keep it close to his thorax region. Their abdomen is the most delicate part of their body. Therefore, it makes sense to protect it in advance.

This condition can be confused with their body language when they are dehydrated. When they become dehydrated, their limbs become paralyzed and curl instead of the tightness around the abdomen.

When Tarantula is in the Grooming Phase:

Tarantulas use their legs to groom themselves, so it is essential to see if they are rubbing their bodies to warn you or just rubbing their feet and other parts to cleanse themselves.

They need to keep them clean of debris and other parasites so that they can sense any imminent danger – most of which they can sense through their hair, vibration, and body heat.

When Tarantula is in Molting Phase:

When your Tarantula is in the molting phase, they will usually be very slow and remain very inconspicuous. They can choose either to be molted in their den or to do it on the surface.

How to Handle Tarantula:

Mostly, your Tarantula doesn’t need any managing or petting to be convinced by you with your love or affection. They will do an excellent job with the “don’t touch me” policy.

But you want to handle them when you take care of them while changing their cage.

It would help if you did these things:

This information will now help you better understand your Tarantula and handle it better than ever before.

All tarantulas are toxic, and some bites cause severe pain that can last for several days. In general, the effects of each type of tarantula bite are not well known. Although many species’ bite is not considered worse than that of a fever, some species’ bite is excruciating and produces severe spasms that can recur several days. The poison of the African Tarantula also causes severe hallucinations.

In all cases, it is best to seek medical help. Because other proteins are added when the toxin is injected, some people may develop severe symptoms due to an allergic reaction relatively than a poison. Such allergic reactions can be fatal.

Before the bite, the Tarantula may indicate its intention to attack in a “threat posture,” in which it raises its prosoma and raises its front legs in the air, extending its fangs and start hissing very fast (in some species). Tarantulas often hold this posture longer than the actual risk period of predator or human.

Their next step, shorter than the bite, is to slap the intruder with their front legs. If this reaction fails to stop the attacker, the American tarantulas may turn to the next and throw their urticating flick hairs towards the pursuing hunter. The next answer may be to leave the scene altogether, but especially if no line of retreat is available, their final answer may be to turn and bite suddenly. Some tarantulas are known to give “dry bites,” i.e., they can defensively bite an animal that invades their space and threatens them, but they do not pump poison into the wound.